Lutein and zeaxanthin are two compounds called “carotenoids”. These are organic pigments usually responsible for red / orange colors in nature. It’s also found in our eyes as a part of our visual processing system.

There’s some evidence that raising lutein and zeaxanthin levels could improve reaction speeds. This is controversial generally, but this paper found that even young people who supplemented the compounds found a benefit in speed.

This is interesting to me because reaction speed is a key part of performance in many domains, both competitive (games, sports) and in daily life (driving, cooking). It’s also an indicator of brain health. As someone who once juggled foam balls and supplemented other nootropics just to improve Destiny 2 gaming performance– this was interesting to me despite not really doing anything that requires twitch-fast reaction times today.

Unlike older posts I’ve made in the past we’ll rely a lot less on papers as a speculative reason to try something and, more on tests we’ll be performing ourselves. Here’s a quick overview of my last 14 days testing it out.

You can also see the raw data here. 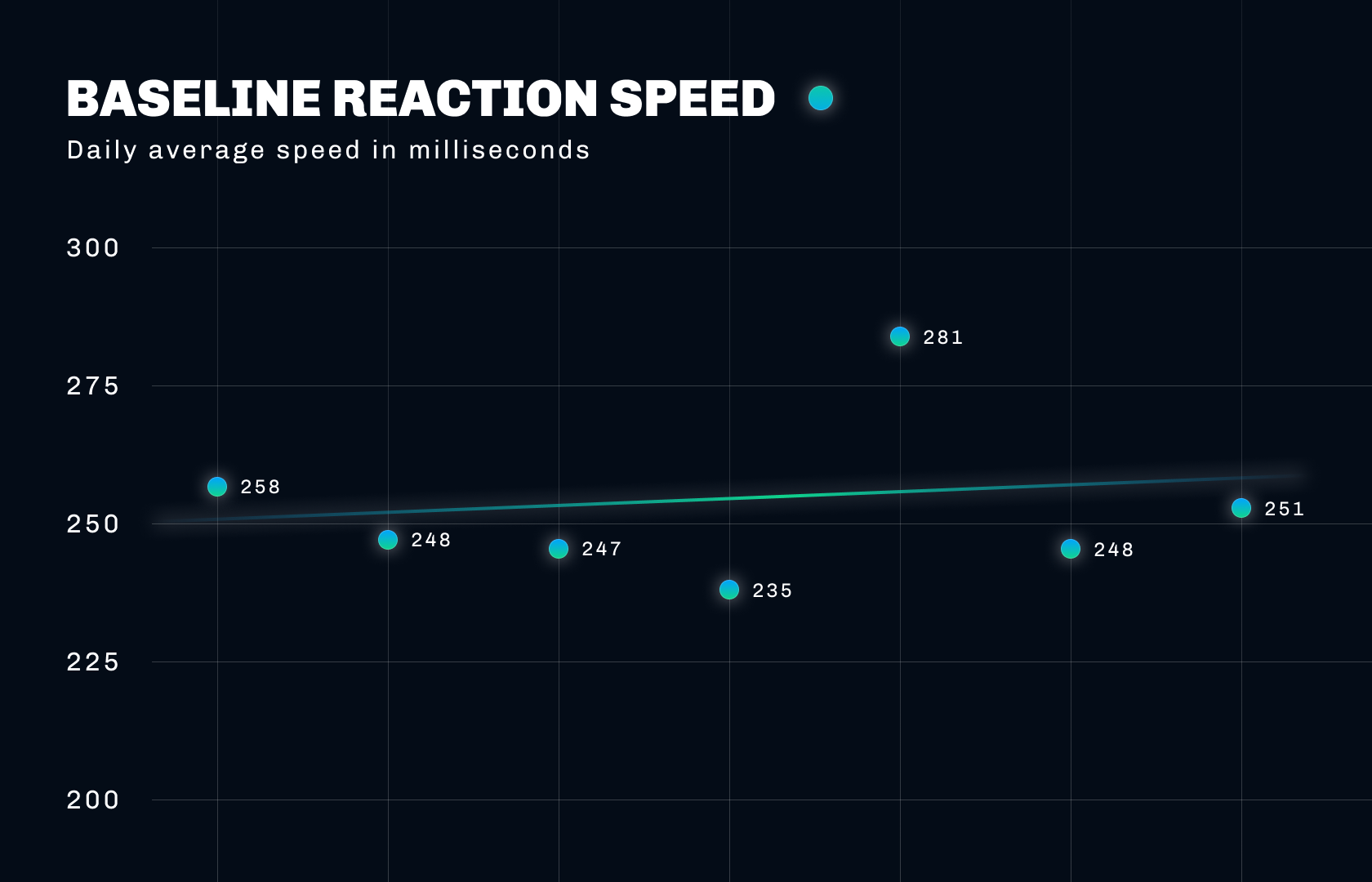 Averaged performance daily over the first week. Lower is better.

We did 15 reaction speed trials per day for a total of 7 days. To be consistent, we always did this on the same device (a Macbook Pro trackpad) and shortly after coffee on an empty stomach.

We ended the week with an average reaction speed of 253ms across a total of 105 trials. An interesting detail is that we didn’t really improve during this week, if you’re wondering whether improved speeds could come from practicing. 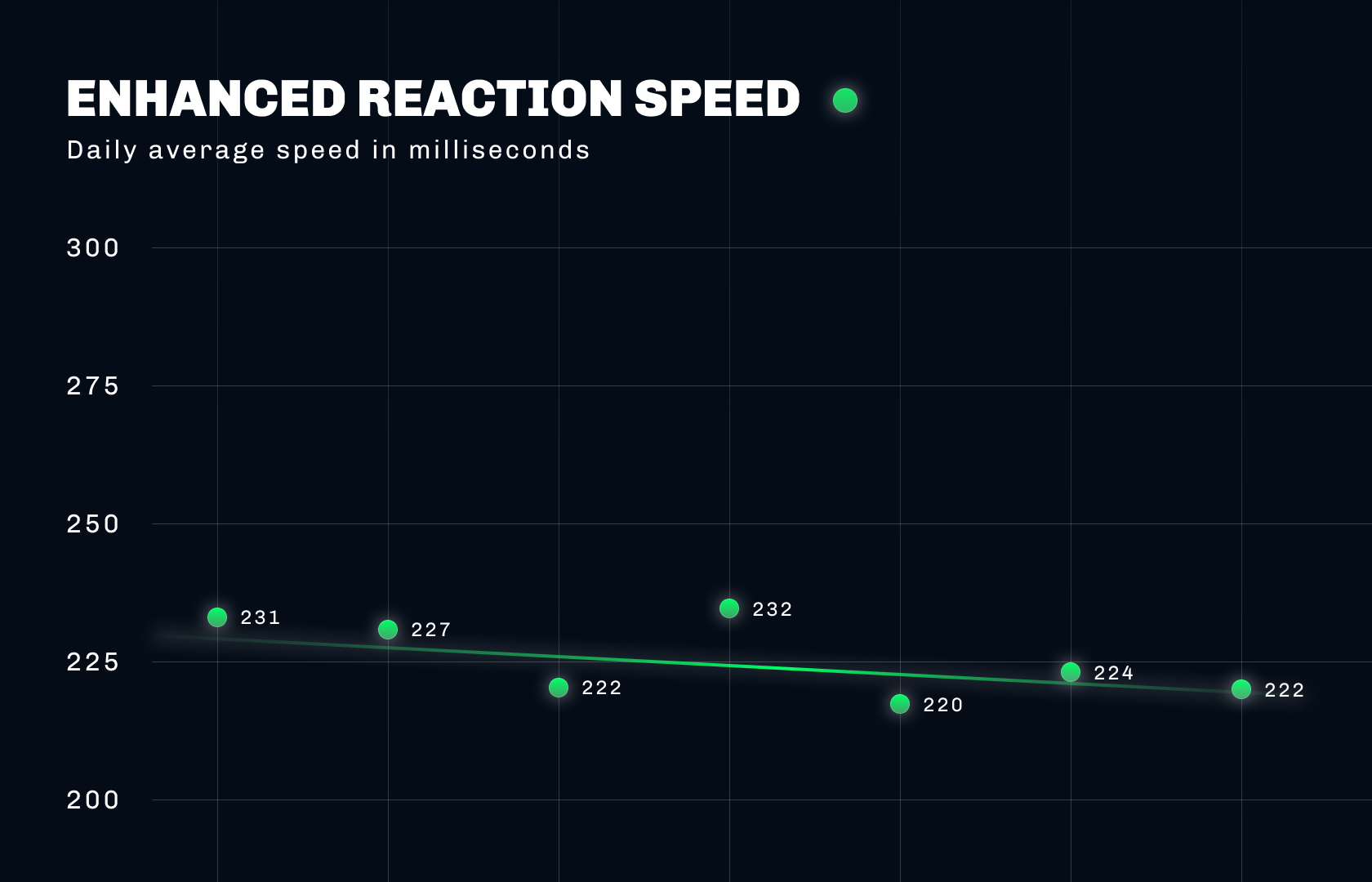 Averaged performance daily over the second week. Lower is better.

In the second week we did the same thing as the first– but supplemented with 50mg of lutein and 10mg of zeaxanthin early in the morning. As with the first test we did the reaction speed test from Human Benchmark on an empty stomach and on a Macbook Pro to keep things as consistent as possible.

Our test was way shorter than the one in the paper, but after 7 days the data was both clear and divergent. Our new average was 226ms, nearly 30ms faster than during the first week. Unlike the first week our times did get better. It’s unclear this is because of lutein and zeaxanthin levels rising over time or due to practice, but the effect does not seem to be major. 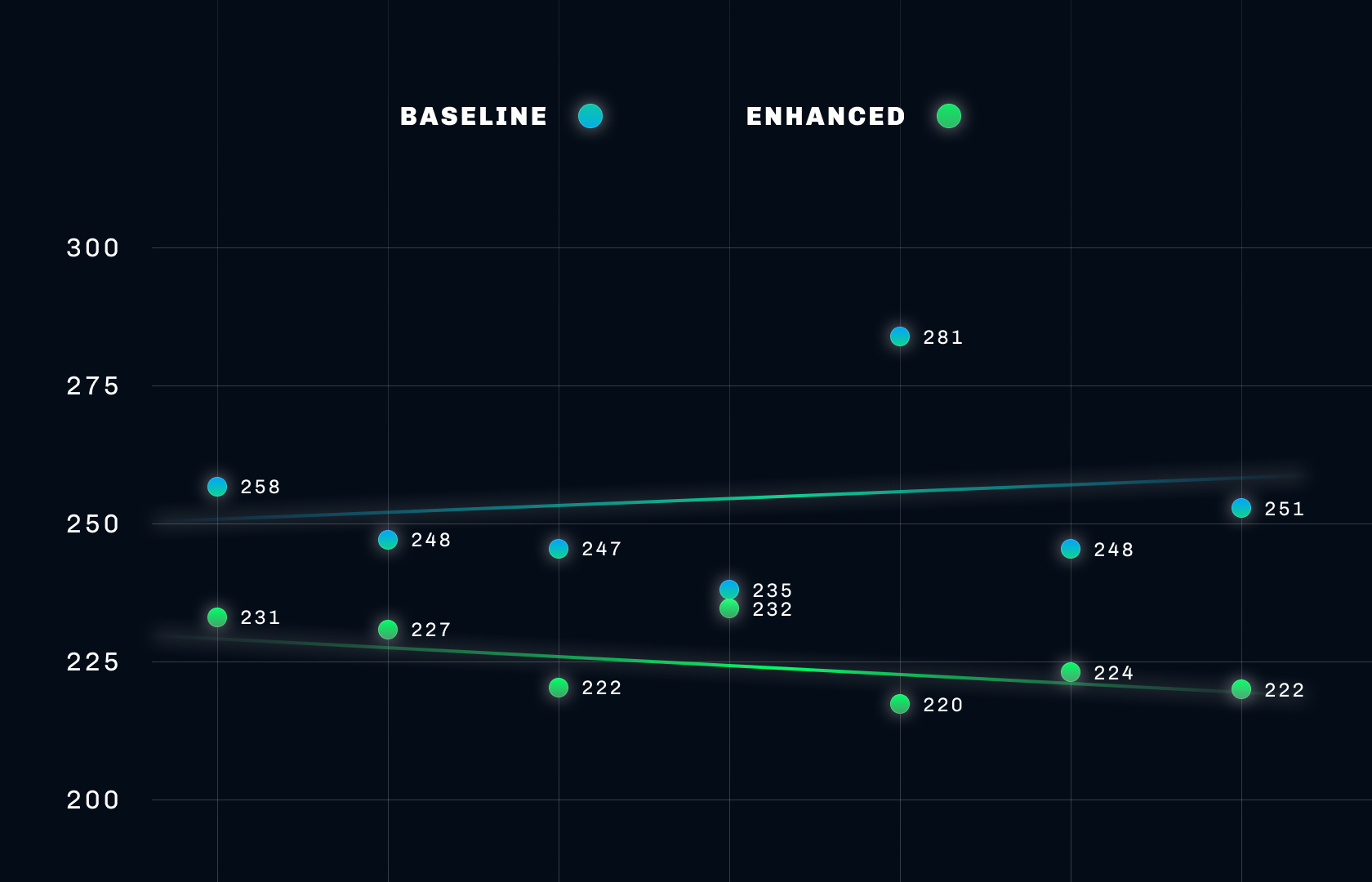 Comparared performance daily over the two weeks. Lower is better.

When the two weeks are compared a very clear gap emerges in the natural baseline week versus the enhanced week. We only came close on a single day (day 4), and from the very first day of supplementation we were already doing better than the entire week before. Also, turns out I accidentally ate eggs that day (which contain lutein! See the next section.)

Like I mentioned earlier, I don’t have any reason to boost reaction time right now; but if you’re doing anything remotely competitive that relies on vision, a change to your diet and lifestyle could considerably effect your performance.

Some interesting quirks from the data:

I actually accidentally ate on Day 4 of the baseline trials. I had some eggs (which have lutein and zeaxanthin). Could that account for the better-than usual reaction speed?

I had a beer the prior night night, and it appears to have a terrible effect on my score the next morning. Consider avoiding alcohol if you’re looking for peak performance the next day.