I’m not sure how much total time I’ve spent stabbing myself with sensors, building apps to track my biology, concepting brain training games, or how many thousands of pills I’ve taken to tweak a particular aspect of my cognition— but I reckon it’s all quite damn high (at one point my daily nootropic stack was ~20+ pills). Out of all of the things I’ve done in this domain few have been as satisfying as growing my own broccoli sprouts as a sulforaphane supplement. It’s a compound being studied by Johns Hopkins for possibly inhibiting cancer, is engaged in clinical trails for treating autism, and has recently seen a big rise in interest after making the rounds on big podcasts like the Joe Rogan Experience.

I’m going to talk a bit about what it does, share the growing techniques I’ve tried, as well as some methods for increasing the amount of sulforaphane produced by the plant. 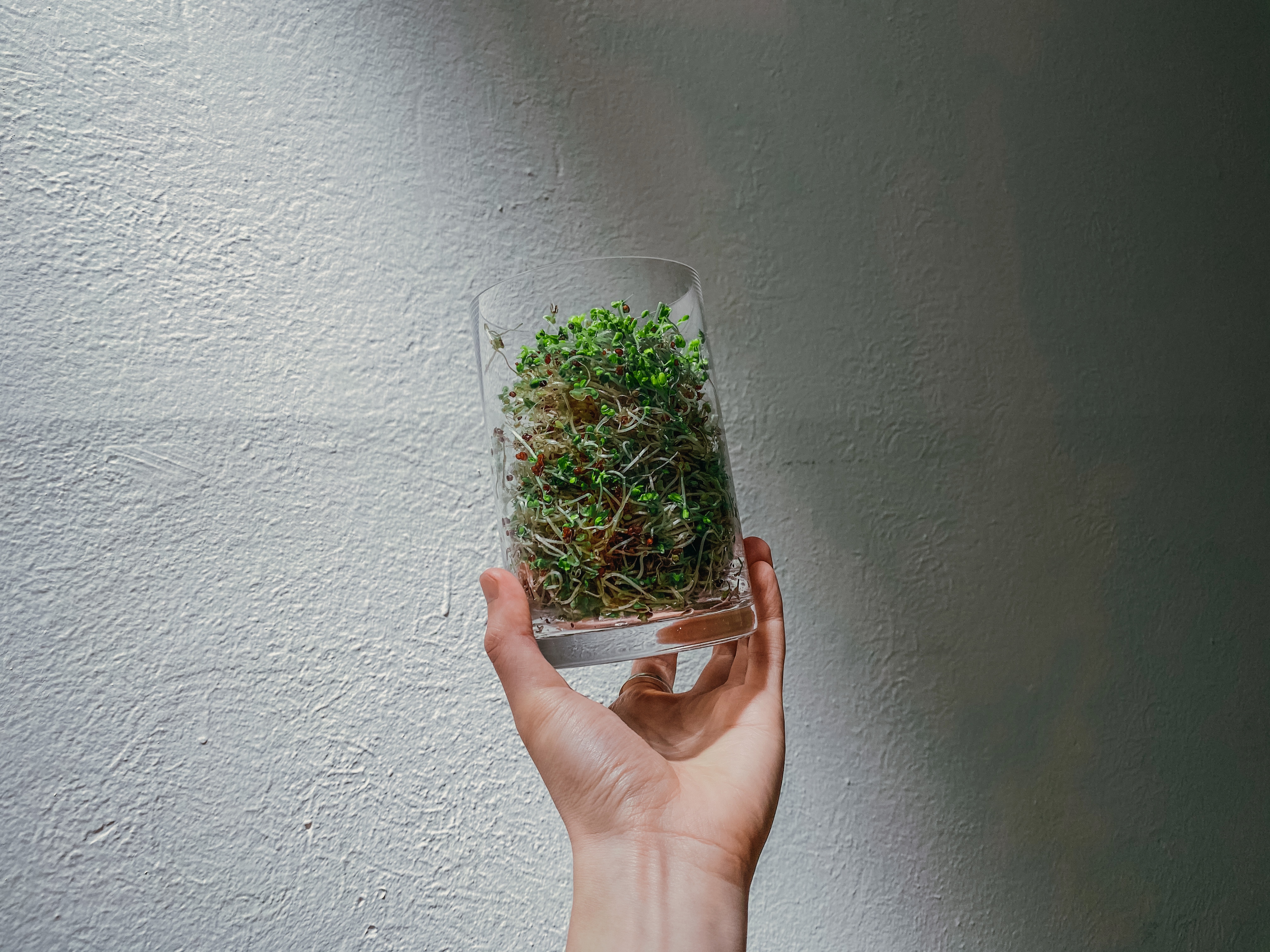 Sulforaphane is a compound found in cruciferous vegetables (kale, broccoli, etc) that I would describe as “very healthy”. This is normally a huge load of bullshit for describing anything (see the nuance required in modern discussions around cholesterol, fat, salt, or sugar as an example of how useless the word is) but in this case it seems completely adequate given the literature– presenting evidence that it can prevent cognitive deficits, reduce tumor sizes, remove benzene from smoker’s lungs, is protective against alcohol and even protect you from the sun. I should of course note that I’m not advocating any of those claims or studies as necessarily true, but simply that I have found them compelling enough to try supplementing sprouts myself.

Now, supplements sit in this “kind of fringe” zone where they’re mainstream enough for people to talk about but mostly looked upon with skepticism given that loads of them probably don’t do anything. Many supplements (and nootropics especially) have an even more woo-woo kind of aura, and there’s few things more woo-y than a cancer-reducing cognition-enhancing broccoli compound I’m nursing from seeds. Regardless, I’m interested in nootropics (and biohacking quite generally) because I’m not interested in my ability being bound by the natural equilibrium of my brain’s particular neurotransmitter mix. For the same reason, I’m not interested in whatever genetic cards I’ve been dealt and find compounds like sulforaphane interesting for their (admittedly speculative) potential ability to improve health-span.

Sulforaphane supplements aren’t easy to come by: the compound degrades rapidly after it’s made by the plant. If you want some for yourself you’re better off growing your own. Sprouting broccoli seeds is easy and can mostly be done in any container if you understand the basic principles. I’ve tried a few different methods in the two years or so I’ve been sprouting: from mason jars with sprouting lids, to drip sprouters, and a kit I just recently started using called the Easy Sprout which is now my favorite tool for the job. 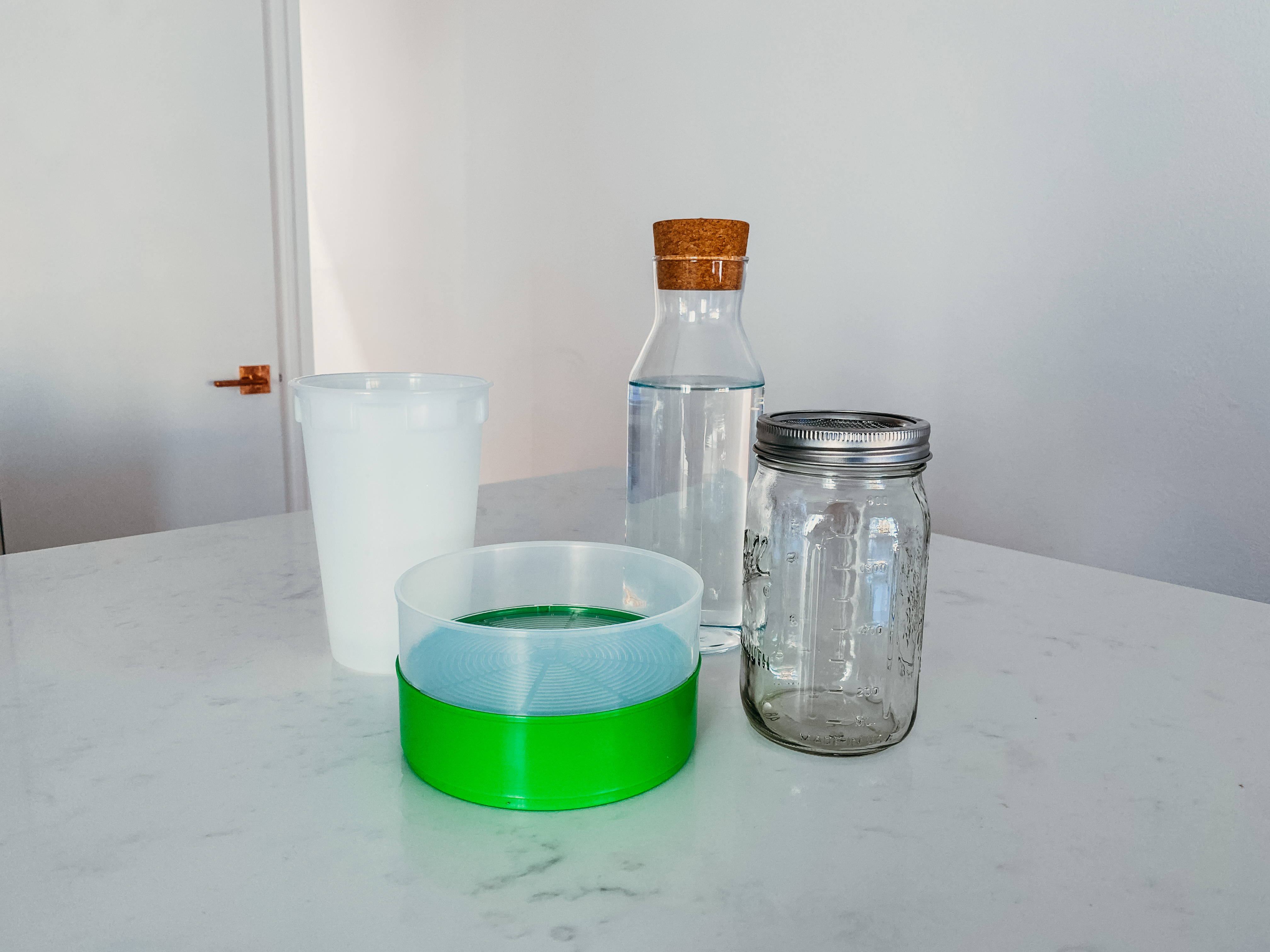 They each have their tradeoffs; but my only bad experience has been with the rotating drip-tray sprouters (which I’ve learned aren’t great for broccoli sprouts specifically). I ended up with a bad batch of sprouts that started rotting because the tray didn’t drain properly. I never used that tray again after that. Aside from the drip sprouter, it’s simple enough that all you really need is a container, some seeds, and some water.

Since most people will probably have mason jars, these instructions will be tailored for that. If you’re using something else, just adapt the instructions. 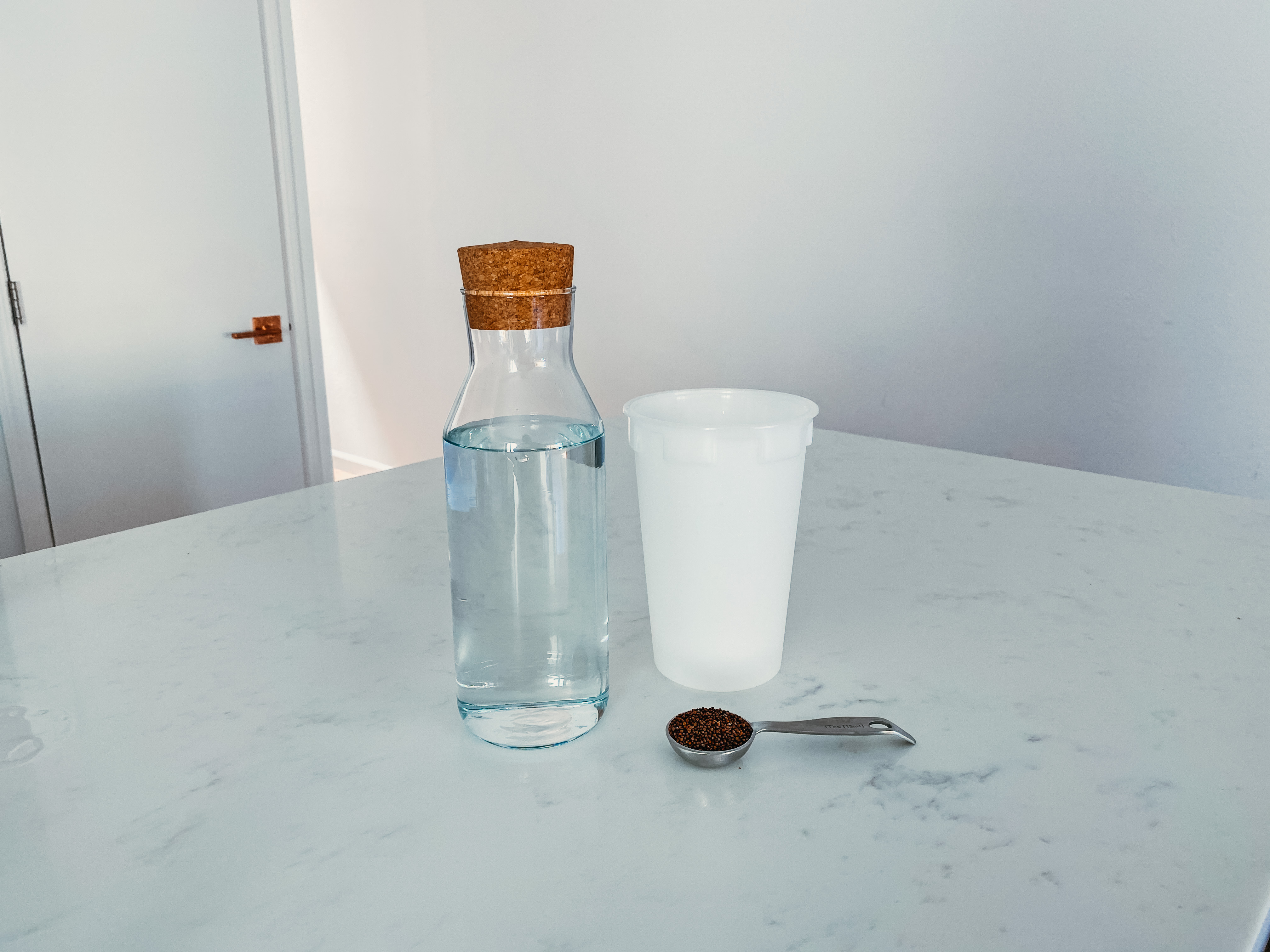 All you need are seeds, water, and a container. Easy Sprout pictured.

Pretty simple, but there are some things to consider if you want to maximize sulforaphane content and not just have sprouts to eat.

You might think it’s time to cook your sprouts once you have a batch, but no. First, broccoli sprouts taste awful, so you probably won’t just start chowing down on this alone for lunch. Second, heat destroys sulforaphane, so you’ll have to enjoy them raw. I tend to mix mine with salads like a regular ingredient.

Anyways, sulforaphane is produced when the plant’s cells get damaged. The reason there aren’t many sulforaphane supplements is because the compound is very unstable and degrades with time or heat. Of the supplements that do exist, most are the two precursors that mix to create sulforaphane, rather than the compound itself. Some are even just one of the precursors which…does nothing. See Johns Hopkins’ website for a list of verified supplements. One I‘ve tried is Avmacol– I’ve used this supplement on-and-off, but it’s now constantly sold out, and apparently very expensive for the amount of potential sulforaphane it produces inside of you. It is, however notably being used in a number of clinical trails.

You can maximize the amount of sulforaphane produced in your sprouts through a clever process of freezing and steeping in 70°C / 158°F water for ten minutes to create maximum damage. This produces an apparent 3.5X increase in sulforaphane content according to this video by Dr. Rhonda Patrick. Her video is based on research here which found a massive increase in sulforaphane production when the sprouts were heated up to their limit. She combines this with freezing first, which creates cellular damage in the form of ice crystals. I have tried this method once or twice for smoothies, but I find the soggy defrosted texture to be disgusting, and the taste quite unbearable when large quantities are blended together with…anything. 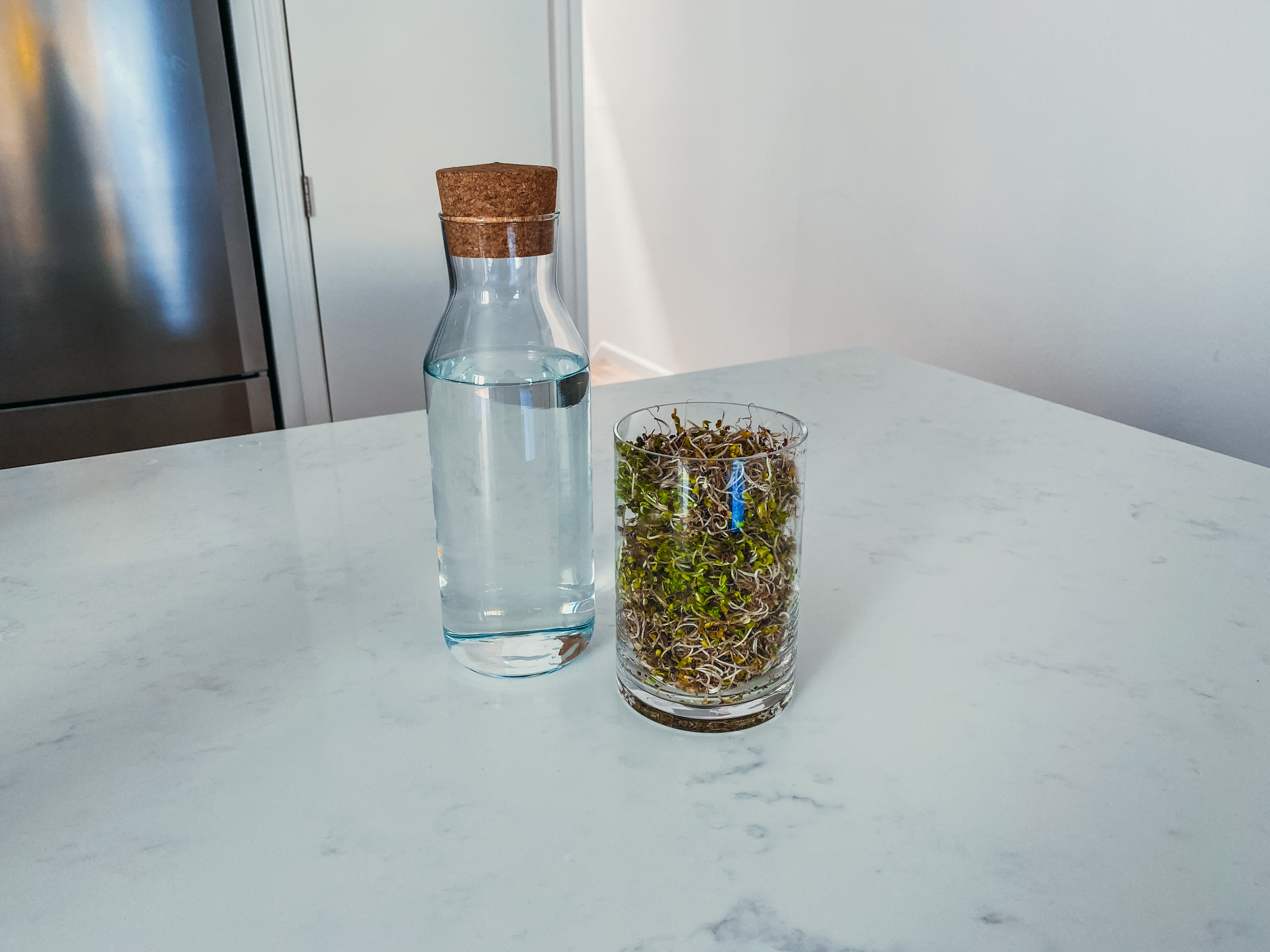 If you do plan on adding these sprouts to your regular regiment, definitely make sure you get enough iodine in your diet as well or you’ll end up getting hospitalized for an embarrassing reason, like this lady who had too much bok choy. Yes, you can injure yourself by having an extreme amount of a common food. Even water.

Outside of just growing and eating fresh broccoli sprouts, I’ve recently started planning a freeze-drying and powderizing process for preserving the sulforaphane precursors in powder form. The idea here is to create a shelf-stable powder that can be hydrated or sprinkled on salads or other foods so that the window of freshness isn’t so short and urgent. I will follow up here or in another post if I decide to do this.